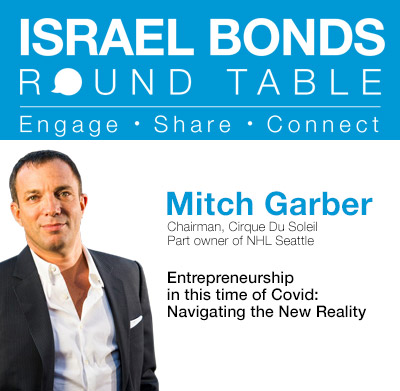 On May 20, 2020, Israel Bonds Canada hosted its second virtual Round Table event with Mitch Garber, Chairman of the Cirque Du Soleil, on the topic of ‘Entrepreneurship in this Time of COVID: Navigating the New Reality.’

Spearheaded by the Israel Bonds New Leadership in Montreal, the event was bookended by New Leadership co‑chairs Izzie Steckler, who introduced the speaker, and Matthew Azrieli, who moderated a spirited Q&A.

“What is exciting for all of us is that in the past 3 weeks, despite the global economic crisis, The State of Israel was affirmed at AA- or better by all 3 credit ratings agencies – Moody’s, Fitch and S&P.

“To put this in context, as of May 11, S&P had downgraded 20 percent of the countries it reviewed and put another 15 percent on a negative outlook. In contrast, the news for Israel was positive.

“There are many reasons for the favorable ratings. Although Israel Bonds themselves are not rated, one of the factors referenced by Fitch for the ‘stable outlook’ was an ‘active diaspora bond program’.

“That is all of us – that’s you as Israel Bonds investors.”

Benzacar Savatti went on to say that the Director General of the Ministry of Finance of Israel recently stated that Israel Bonds is seen as a safety net for Israel, as both a financial benefit and tangible way of showing that the Jewish Diaspora is a committed force.

“Every investment in Israel Bonds sends that message. You’re investing in a winner!” she said.

Mitch Garber kicked off his presentation with an emotional call to action: “This is an opportunity for everybody who is healthy and who is young enough, and those are two really important factors, to do something, to pitch in.

“There are too many elderly people who require food delivery. The frontline workers sometimes don't get to go to the grocery store - they need people to bring food to the hospital that they can bring home, or put in the fridge at the hospital, so they could eat and go back to work the next day.

“I would urge everybody to try to find one activity that you can do, that will bring a lot of joy to people who are either working really hard in challenging circumstances, or to the elderly, who are by far over 90% of the victims of COVID.”

Speaking to the main theme of his presentation, Garber said “The definition for me of entrepreneurship, if I had to think about it in two words, is invention, and reinvention.

“On the topic of entrepreneurship, we’re crossing the human experience and the economy. They are interlinked and I cannot un-intertwine them. From a reinvention point of view, I would say that the conversation of the Cirque du Soleil today is we have failed to build an online business where our content is streamed in a way that people would want to pay for it. That is not because we didn't think of it, it's because our content actually doesn't look that good on TV or on a monitor. But I don't think that's going to be an excuse for the future.”

Speaking more on the unique challenges facing the internationally renowned Cirque, Garber said,  “We never had a scenario where 100% of the global business would shut down because we never thought there was any event that could happen where you couldn't do business in Italy, or Canada, or Brazil, or France… all the same time.”

On the topic of Israel Bonds, Garber said that it makes “perfect sense to me” to buy Israel Bonds – as an investment and to show solidarity. It’s really a win-win scenario.”

“The Jewish community always shows its cohesiveness and in times of crisis, that’s where we come together not only for ourselves but also for others and in doing so, sets an example.”