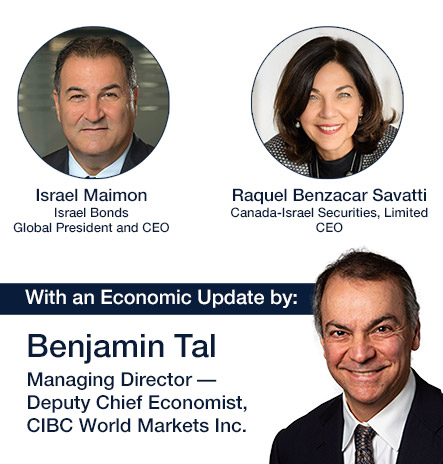 "The State of Israel is our mutual home. Just as we are taking care of our households, we need to secure and take care of our beloved Israel - this is our obligation to our only Jewish Home."

Raquel Benzacar Savatti presented an overview of sales, including sales realised through the 1-year old eCommerce website, which enables clients to buy Israel bonds online. “Online sales have been the catalyst for a surge in new purchasers of bonds.”

Benjamin Tal gave an insightful overview of the current economic landscape in Canada. “We have to try to put this madness in perspective. It is not easy, but we can make some educated guesses and see what makes sense and what doesn’t.”

“The question is, what is this? Is this a recession? Is it a depression?

“It is not a recession in the sense that its not behaving like a normal recession, because we caused it. We decided to slow down the economy, and to shut it down. It is also not a depression, because in a depression, you are in free fall, there is nothing beneath you – you lost your job – good luck. This is not the case now.

“This crisis has an end game. This end game of course is a vaccine. By the time we have a vaccine, or a treatment, this crisis is basically over. What we are doing now, all of us, is simply buying time between now and then.”

Addressing the Canadian job market, Tal went on to say “Some people say we're all in it together, were all in the same boat...No. We are not. The vast majority of people who lost jobs are low income Canadians. They are the number one casualty. Part timers and full timers that are payed below average wages are basically eighty percent of job losses. Many of them are women. It is not equal.

I suggest that what we are seeing now from the government is the putting together of the plumbing for Canada’s future social assistance system. I would not be surprised if the $2000 CERB, that is now given to the 50% of the unemployed who cannot get EI, will turn into some sort universal basic income system. We are putting the infrastructure together for our social assistance program in the future and we don't even know it.”

“I think it’s very important to put into perspective, when it comes to this crisis, that we have to separate the discussion into two. One is before the vaccine - we are seeing some sort of an on-and-off economy with some volatility, and two, post-vaccine, an environment in which we will be recovering into recessionary territory, and then we will see the light. In between, we have to remember one thing; This is not a depression. This crisis has an endgame, and what we are doing now, is simply buying time until we reach that point.

Speaking to how this will affect the real estate market in major Canadian Cities, Tal explained, “If you look at the next 4 or 5, or 6 years, I think this market will remain relatively strong. We simply will have a break of a year, where prices and activity can go down and rental activity will slow down. I think that will be a good thing, not a bad thing, bringing some sanity to this very expensive market.”