Jonathan Lewis: “I Immediately Felt That This Was Our Country”

Since visiting Israel for the first time in 1967 with his family, Jonathan Lewis instantly developed a strong connection with the Jewish homeland. Amidst the upheavals of the Six‑Day War, witnessing Jordanian soldiers standing guard at the division of Jerusalem, as a young boy, he acutely recognized the dire need to protect and defend Israel’s borders and people, recalling “I immediately felt that this was our country.”

The London-based real estate lawyer cites the conflict as having a major impact on his life, leading him to deepen his desire to stand for Israel’s independence and encourage support from within his local community and beyond. Jonathan explains, “I went on my first organized tour of Israel when I was 16 and then became heavily involved upon returning from a gap year at the Hebrew University,” continuing that the experience inspired him to take a stance as an “activist and advocate for Israel as a student on UK campuses in the 1970s.”

Jonathan Lewis outside of the Israeli Foreign Ministry in Jerusalem

In participating in Israel Bonds’ recent delegation to Israel commemorating its 70th anniversary, although he frequently travels to Israel, Jonathan describes the opportunity as a privilege, explaining “It is fascinating to see the enthusiasm for Israel from so many people.” He is equally amazed at Israel’s achievements over the past seven decades, admiring its flourishing economy and high-tech innovation, but most of all, he identifies its greatest accomplishment to be “the gathering-in of millions of Jews from all over the world, from the Americas and Europe, to North Africa, and absorbing them into one society.”

Owner of a home in Herzliya with many nearby relatives and friends, he divulges, “Although there are still many challenges, I love sitting in a café in Tel Aviv and watching the melting pot of people that Israel has become.” 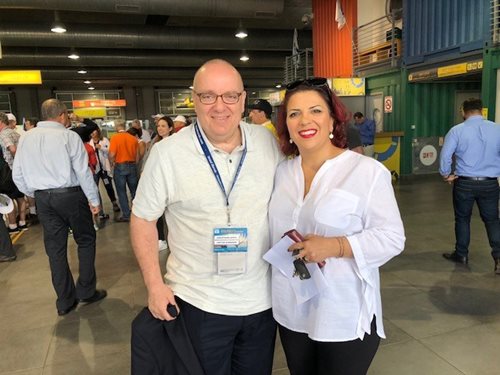 A member of the international board of Israel Bonds, Jonathan perceives the UK Jewish community has shifted their appreciation for the Bonds movement in an increasingly positive direction over the years. He acknowledges the importance of fundraising through individual charitable causes, yet illustrates the unique offering presented by Israel bonds. Jonathan elaborates, “When one of the biggest challenges we face is the BDS movement, now is the time when this is best answered by investing, which is the opposite of divesting.”

Firmly committed to the Bonds mission, he further attests, “Bonds present an attractive investment in their own right and people need to understand that this is an investment and not some other form of charitable giving. Once this is understood, I believe that both the Jewish community and institutional investors in the UK will invest significantly in Israel bonds, and this is what I am ambitious to achieve.”