On October 26, Israel Bonds Women’s Division U.S. held an exclusive briefing with Merav Michaeli, Minister of Transportation and Road Safety and Israeli Labor Party leader, who provided an overview of her endeavors covering many issues and sectors, including socio-economic challenges, gender equality, religion and state topics, LGBT rights, labor concerns, promoting the peace process, as well as clean energy and safe and effective transportation. MK Michaeli, Knesset Member since the 19th Knesset in 2013, serves as the Chair of the Zionist Union parliamentary group and coordinates the opposition. Prior to her election to the Knesset, Michaeli was a prominent journalist, regularly publishing op-eds and interviews, and also edited and hosted news and entertainment programs on both television and radio. MK Michaeli was involved in the establishment of Galgalatz, and Radio Tel-Aviv radio stations and served as a lecturer in universities and colleges on media and gender. 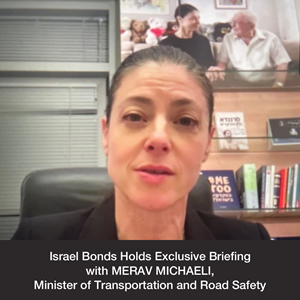 Minister Michaeli spoke to attendees via Zoom on her work of over two decades of activism for women’s rights, having founded Ezrat Nashim in 1997 to promote assistance centers for victims and survivors of sexual assault. She was member of the executive committee of the Israel Peace Initiative and a member of the directorate of the Israel Women’s Network, and her fight for equality and social justice as a progressive lawmaker continues to gain recognition and distinction.

Bonds Global President & CEO Israel Maimon praised Minister Michaeli stating, “Everything you do is for Israel and its people.” He added, in appreciation for all Israel Bonds supporters on the call, “Thank you to our investors that joined from all over the world.”