On April 8, International March of the Living and Israel Bonds commemorated Yom HaShoah with a ceremony featuring a 3-D digital march dedicated to the Holocaust and the memory of the six million lives lost in the tragedy. The virtual commemoration and online memorial ceremony on Holocaust Remembrance Day, led by Israel’s President Reuven Rivlin, a number of Holocaust survivors, Jerusalem Mayor Moshe Lion, Jewish Agency Chair Isaac Herzog, KKL Chair Avraham Duvdevani and Rabbi Israel Meir Lau, honored the men, women and children who were removed from their homes and forced to experience the abuse and horrors of the concentration camps throughout Europe at the hands of the Nazis. 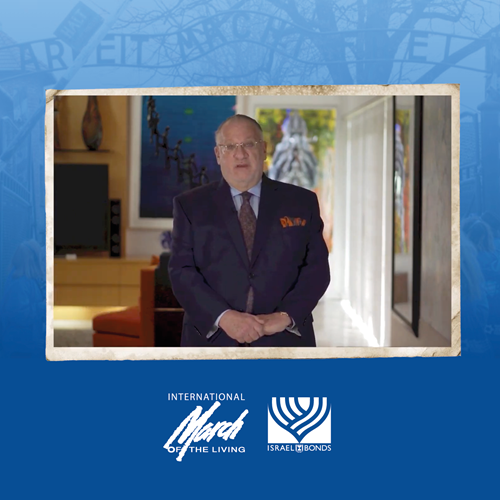 Since 1988, over 300,000 visitors from around the world have participated in delegations with the International March of the Living, walking the same path leading from Auschwitz to Birkenau on Holocaust Remembrance Day, commemorating the millions of souls lost, in dedication to preserve their legacy. Adding to the significance of this year’s International March of the Living, Rabbi Israel Meir Lau, exclaimed, “Because we are an eternal and immortal nation - we are here and will be here forever.”

U.S. and International Chairman of the Board of Israel Bonds, Howard L. Goldstein, was honored to light one of the six torches of remembrance, along with Elie Horn, philanthropist and co-founder of Olami Organization. Through decades of commitment to the Israel Bonds organization and his work in helping to realize Israel’s full potential through support of Israel Bonds, Howard proudly declared, “The torch, now alight in Birkenau, burns in memory for all those who perished; although they have no one to mourn for them, their memory will never, ever be forgotten.” He added, “For generations to come, we always put a question mark at the end of the sentence as to why, but G-d will always put the period. The torch continues to burn, and will never be extinguished.”

The virtual ceremony also paid tribute to the over 900 Holocaust survivors who lost their lives in the coronavirus pandemic, and saluted the commitment of the healthcare workers who continue to battle COVID-19 and save lives. Dr. Albert Boula, chairman and CEO of Pfizer and son of Holocaust survivors, expressed his sentiments for forever commemorating those lost in the Shoah, and a special dedication to the heroes of the Holocaust who provided medical care in the ghettos and death camps.

Dr. Anthony Fauci, director of the National Institute for Allergy and Infectious Diseases and a leader at the forefront of combating the pandemic, also a guest of the event, followed Dr. Boula’s recognition of healthcare workers everywhere and the six million Jews lost in the Holocaust, stating, “We recognize them as heroes and remember them for their sacrifices as they work to save lives. We also remember the millions of lives lost in the Holocaust, as their virtue and goodness must always remain in us.”

The 2021 International March of the Living and future delegations held by the organization, will continue to perpetuate, remember and remind the future generations of our heritage that the tragedy of the Holocaust should never be forgotten, and as Jews it is a fundamental cornerstone of our existence that we unite in proclaiming the words “Never Again” forever.