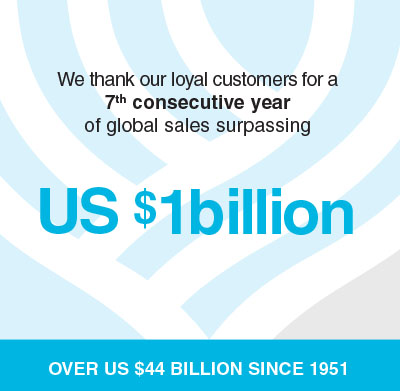 On October 30, 2019, Israel bond sales Globally exceeded the US $1 Billion dollar mark, making 2019 the seventh consecutive year the US $1 billion milestone has been exceeded, it was announced by Bonds President & CEO Israel Maimon.

“Canada is proud to be part of this consistent record of global success. Year over year, our loyal investors have made Canada one of the top performing countries for sales of Israel bonds on a per capita basis,” said Raquel Benzacar Savatti, the CEO for Canada-Israel Securities, Limited/Israel Bonds in Canada. “And now it is easier than ever before to buy Israel bonds. Our eCommerce site launched in April of this year, and we’ve already surpassed US $1 million in online sales. Equally exciting is that over 850 customers have opened their profile and purchased Israel bonds online. The ease and simplicity of online buying has been met with enthusiasm from both new and existing customers, with many people returning to purchase Israel bonds as convenient gifts for various celebrations in addition to buying larger Israel bonds for their investment portfolios”

Worldwide sales since the Bonds organization was established in 1951 are rapidly
approaching US $44 billion.