NOTE: Keep your Israel Bonds pitch down to a maximum of 3 minutes. 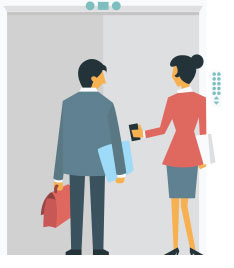 You're doing the bonds pitch for the High Holy Day campaign – and guess what? On the way to a meeting, you’re standing in an elevator with a member from your congregation.

Guess what, you ask. I’m doing the Israel bonds speech this year at our synagogue. Your co-member says, Ok, nice. But what’s an Israel bond and why should I buy them?

It's time to roll out your big elevator pitch.

You have an elevator pitch, right? Right?

Now you do, below. Use this sample speech to help keep your Israel Bonds pitch to a maximum of 3 minutes.

Hit the high points and don't forget to mention that this year - FOR THE FIRST TIME EVER - Canadians can now buy Israel Bonds ONLINE!

With these words, in May of 1951, the State of Israel began a remarkable promise, and forged an indelible Bond between the people of Israel and friends of Israel around the world.

You might think that an Israeli financial product, sold only in the Diaspora for over 68 years, would be familiar to almost everyone.

In return for the loan, Israel agrees to pay interest to you, the bondholder, and repay the loan at the end of its term. Simple!

Well, as we know, it was Ben-Gurion who famously said, "In Israel, in order to be a realist, you must believe in miracles!" Sales now routinely surpass $1 billion dollars per year, and total sales since inception have crossed $43 billion dollars worldwide. Israel has never missed a payment!

And yet, these bonds are defined by more than a positive balance sheet. By buying Israel bonds, you are also making a direct connection with the people of Israel.

The magic happens when you write a cheque made payable to the “State of Israel.” Not Israel Bonds. Not the Israel bonds organization… directly to the “State… of… Israel.”

Over and above the financial rates of return, this direct connection with Israel is the real payment, the real dividend, the deeper value.

The beauty of Israel bonds is that they facilitate a level of durable engagement through meaningful financial investments. If you believe in the future of the State of Israel, there is no better way to express that belief than by creating your own stake in that future. That's why Israel welcomes a $36 Israel eMitzvah bond with the same enthusiasm as a 5 thousand, 25 thousand or 1 million dollar Israel bond; a $36 bond for you and every member of your family represents a personal relationship with the world's one and only Jewish state.